To share your memory on the wall of Wendell Mallard, sign in using one of the following options:

He became a member of St. James Baptist Missionary Baptist Church at an early age, where he served faithfully until his death.

He was employed at ITT Rayonier in Jesup Georgia, for 44 years. After his retirement, he enjoyed playing golf and spending time with his family and grandchildren.

To send flowers to the family or plant a tree in memory of Wendell Mallard Jr., please visit our Heartfelt Sympathies Store.

Receive notifications about information and event scheduling for Wendell

We encourage you to share your most beloved memories of Wendell here, so that the family and other loved ones can always see it. You can upload cherished photographs, or share your favorite stories, and can even comment on those shared by others.

Posted Apr 24, 2020 at 10:58am
My prayer are with you during this stressful time. May God’s peace rest upon you.
Gilda Miller
Comment Share
Share via:
LM 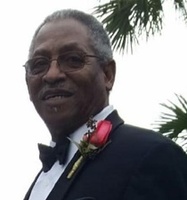