To share your memory on the wall of Ronald Rogers, sign in using one of the following options:

Other than being a hard working man, Ronald enjoyed electronics, technology and mechanics. In his free time, he enjoyed being outdoors and listening to music. He was a big Star Trek fan and loved spending time with his family and friends. As his life was coming to a close, Ronald made the ultimate step and recommitted his life to Christ and accepted him as his personal savior. He was a member of Living Waters Ministry under the leadership of Apostle Shirley Wingate and Elder Joseph Wingate of Midway, Ga. Ronald passed away on Saturday, April 4, 2020, at his home.

To send flowers to the family or plant a tree in memory of Ronald Rogers, please visit our Heartfelt Sympathies Store.

Receive notifications about information and event scheduling for Ronald

We encourage you to share your most beloved memories of Ronald here, so that the family and other loved ones can always see it. You can upload cherished photographs, or share your favorite stories, and can even comment on those shared by others.

Posted Apr 08, 2020 at 08:30pm
To my sister Sharon and the rest of the Rogers family, my husband Dewayne and offer our deepest condolences for the lost of your husband, father, and grand-father.
Please know that we are praying for your family. 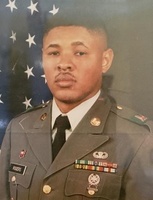