To share your memory on the wall of Ruth Johnson, sign in using one of the following options:

Print
“And God shall wipe away all tears, from their eyes; and there shall be no more death, neither sorrow, nor crying, neither shall there be any more pain: for former things are passed away” Revelation 21:4

Ruth Evelyn Derry Johnson wa... Read More
“And God shall wipe away all tears, from their eyes; and there shall be no more death, neither sorrow, nor crying, neither shall there be any more pain: for former things are passed away” Revelation 21:4

Ruth Evelyn Derry Johnson was born January 28, 1931, in Waycross, GA. The third of eight children born to Reverend Myles & Eula (Andrews) Derry. She accepted Christ at an early age and joined St. James Baptist Church, in Ludowici, GA, where she sang in the choir, served on the finance committee, trustee board, and served faithfully as a deaconess until her health failed. She was educated locally in the Long County Public School system, and graduated from Savannah State College with a B.S. in Elementary Education. She furthered her education at Columbia University in New York City, where she earned an M. Ed. degree in education.

After graduation, she taught in the Lincolnton County (GA) school system, and later returned to Long County, where she retired after 42 years of dedicated service. In addition to her teaching obligation and responsibilities, she was a high school chorus director and senior class advisor at Walker High School. As a teacher, she believed in teaching values (“Train up a child in the way he should go, and when he is old he will not depart from it” Prov. 22:6). She loved teaching and instilled in her students that education was the key to success. Most importantly, she prepared them for the future, (“where there is no vision, the people perish” Prov. 29:18). She touched the lives of many and will be remembered as a dedicated and committed educator. It was her goal for all of her students to be successful in life.

To send flowers to the family or plant a tree in memory of Ruth Johnson (Derry), please visit our Heartfelt Sympathies Store.

Receive notifications about information and event scheduling for Ruth

We encourage you to share your most beloved memories of Ruth here, so that the family and other loved ones can always see it. You can upload cherished photographs, or share your favorite stories, and can even comment on those shared by others.

The FTD Comfort Planter was purchased and planted a memorial tree for the family of Ruth Johnson. Send Flowers

Posted Feb 29, 2020 at 01:51pm
My heartfelt condolences are extended to the family, friends and all with whom lives were touched by Mother Ruth. May the Lord comfort each of you during this time of beareavement and may the precious memories you shared with her bring joy to your hearts in the coming days, weeks, months and even years when you miss her the most, and may you rejoice in knowing that she is now with our Lord and Savior, Jesus the Christ for all eternity. Amen and Amen.
Blessings, Peace and Love.
In His Service,
Barbara L H Williams
Comment Share
Share via: 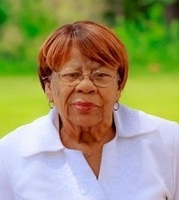