To share your memory on the wall of Margaret Tomlinson, sign in using one of the following options:

Margaret was united in holy matrimony to Fred Tomlinson on March 4, 2000 and remained so until death parted them, however, he, like so many of us will forever carry her in our hearts. She was preceded in death by both parents, Elijah “Buck” and Pearl Goodman Pollock, Sr., her sisters, Lillian Redmon and Betty Thompson and her brothers, Elijah Pollock, Jr, Eugene Frazier and Clarence Pollock.

To send flowers to the family or plant a tree in memory of Margaret Tomlinson (Pollock), please visit our Heartfelt Sympathies Store.

Receive notifications about information and event scheduling for Margaret

We encourage you to share your most beloved memories of Margaret here, so that the family and other loved ones can always see it. You can upload cherished photographs, or share your favorite stories, and can even comment on those shared by others. 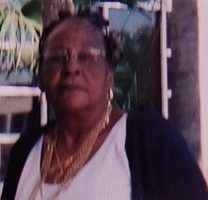